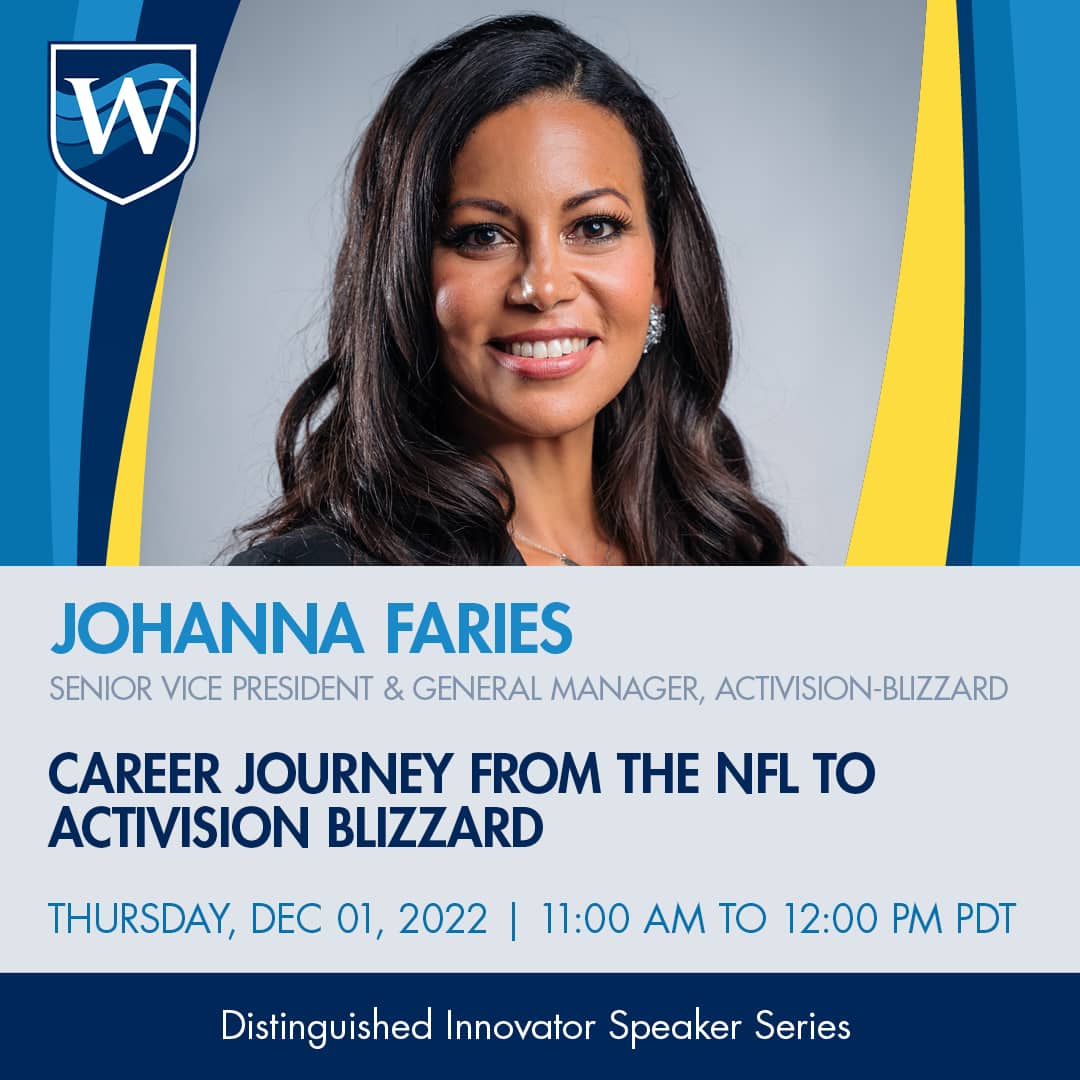 Career Journey from the NFL to Activision Blizzard with Johanna Faries: The next guest in the Westcliff University Distinguished Innovator Speaker series will be Johanna Faries, Senior Vice President and General Manager of Activision-Blizzard, home of the very popular video game, Call of Duty. The most recent title release of Call of Duty, Modern Warfare II achieved record sales of $800 million, beating the opening box office revenue of such Hollywood blockbusters as Top Gun: Maverick by a 6X margin. A graduate of Harvard University, Johanna is a groundbreaking sports industry veteran having served 12 years at the National Football League rising steadily within the NFL executive ranks before being hand-picked to lead Call of Duty and the entire spectrum of intellectual property at Activision Blizzard. Join us on December 1st to learn about her inspirational career and her vision for the future of gaming, esports and the gaming community.

More about Johanna Faries: Johanna Faries serves as Senior Vice President/General Manager of Call of Duty, one of the biggest gaming and entertainment brands in the world and the #1 selling console gaming franchises in the U.S. for more than a decade. As SVP/General Manager, Faries oversees all aspects of the Call of Duty business, including live operations and franchise-wide strategy.

Since joining Activision Blizzard in 2018, Faries led the company’s esports leagues division, including the formation and management of the global city-based Call of Duty League, which includes professional teams in 12 cities across four countries featuring the best Call of Duty players in the world and dedicated amateur competition systems. In its inaugural season, the Call of Duty League hit several major milestones, including its Championship Weekend becoming the most-watched esports event in franchise history.

A graduate of Harvard University, Faries has been named one of the Most Powerful Women in Sports by both Sports Illustrated and Adweek, one of SportsPro’s Top 10 Influencers in 2020, as well as one of FORTUNE’s 40 Under 40 most influential business leaders. Faries is a sports industry veteran, having served 12 years at the National Football League at its League Office Headquarters in New York City.

Throughout her career, Faries has held executive positions in a broad range of diversity and inclusion and career development and mentorship programs and continues to do so as Executive Champion of Activision Blizzard’s Black Employee Network. Faries grew up a multisport athlete and currently resides with her husband and sons in Los Angeles, CA.