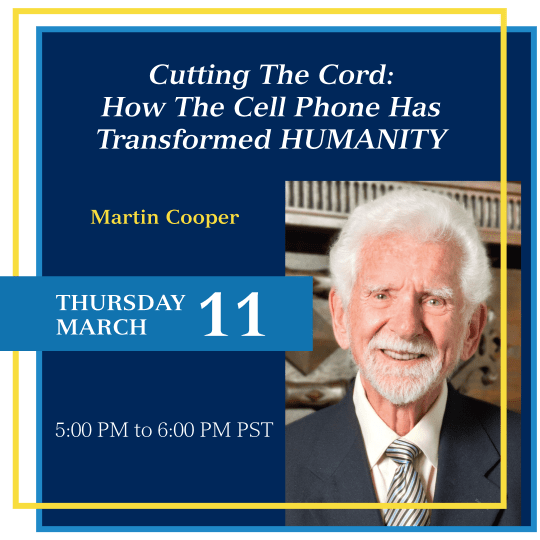 Register
Cutting the Cord: How the Cell Phone has Transformed Humanity

“Father of the Cell Phone” Shares his Vision of the Future

In CUTTING THE CORD: The Cell Phone Has Transformed HUMANITY

San Diego, CA. World-changing, the cell phone revolutionized how people communicate, freed them to get in touch with one another at any time, in any place without the constraints of the wired network. The cell phone led to the creation and growth of new industries.

It centers on a battle for control of how people communicate, involving government regulators, lobbyists, police, technology breakthroughs, failures, quartz, and a horse. At the center of that story is Martin Cooper. This book describes how his early life influenced the creation of the cell phone.

Industry skirmishes became a political war in Washington, a struggle to prevent a monopolistic company from dominating telecommunications. The drama culminates in the first-ever public call made on a handheld, portable telephone—a cell phone. Despite that, the cell phone we know today almost didn’t happen.

Without the vision of a small group at Motorola, the last 40 years of history would be different. Their story is inspiring and instructive. After a 29-year career at Motorola, Cooper became an entrepreneur, helping launch companies dedicated to accelerating cell phone adoption.

The story of the cell phone has much to teach about innovation, strategy, and management. This book also relates Cooper’s vision of the future of personal communications. That story is far from finished. We have only achieved a small fraction of the cell phone’s potential impact.

The cell phone empowers people from all walks of life. It is reshaping how children learn. The ways we work together will soon seem primitive because of continued advances in the cell phone. Most of all, the cell phone will transform medicine and healthcare, contributing to the eradication of disease, elimination of poverty, extension of life, and close coupling of human and artificial intelligence.

Cooper is a graduate of the Illinois Institute of Technology, where he is a Life Trustee. The Marconi Society, where he is a Fellow, awarded him the Marconi Prize “for being a wireless visionary who reshaped the concept of mobile communication.

Legendary futurist, Marty Cooper, who invented the cell phone, one of the most important consumer electronic products of all time, has been tapped for the “Interviews with Important People” segment of CES. It’s part of a series the Consumer Technology Association Foundation hosts during CES and part of the programming on CES Partner Day, January 14.

What does Cooper envision for the future of the cell phone?

By some estimates, nearly 17 million American children do not have adequate internet access at home. That’s roughly one-third of K-12 students in the country. For their households and communities, broadband is either not affordable or simply not available. Smartphone adoption is more widespread than broadband. Affordable, universal wireless coverage is technologically and economically feasible, but we presently lack the will and incentives to achieve it. If we do not solve this, we will have failed millions of students – they will be a lost generation. If we don’t get this right, if we don’t use wireless internet to ensure that all students can benefit from virtual education, we risk serious long-term harm. Educational disparities will persist and widen, not only robbing millions of their own potential but also undercutting our national economic competitiveness.

The cell phone will transform medicine and healthcare, contributing to the eradication of disease, extension of life and close coupling of human and artificial intelligence.

The cell phone offers access to personal banking and entrepreneurship for our poorest people. The way our children learn will be reshaped by the cell phone. The ways in which we work together and collaborate will soon seem primitive because of continued advances in the cell phone and applications.

– Cell Phones as Our Appendage:

As artificial intelligence is evolved into the modern cell phone, it will be more and more personalized; customized to its owner and always learning and adapting to that owner. It will become an extension of the person, taking over the routine tasks, like remembering and calculating, allowing the person to focus on creation and reasoning. It’s ironic that, even today, we call this device a “phone.” And it’s ridiculous that we expect a cell phone user to select from two million apps to customize the phone to its unique user. The built-in intelligence of the future phone will either curate an existing app, or create a new one.

Marty, the “father of the cell phone,” is available for an interview.

His first book, CUTTING THE CORD: The Cell Phone Has Transformed HUMANITY, published by Rosetta Books, $26.99, hardcover, $17.99, ebook, $17.99 audiobook, is not just the story of the cell phone’s creation but also a vision of its future. The book debuts on January 5. Learn more at www.martycooper.com