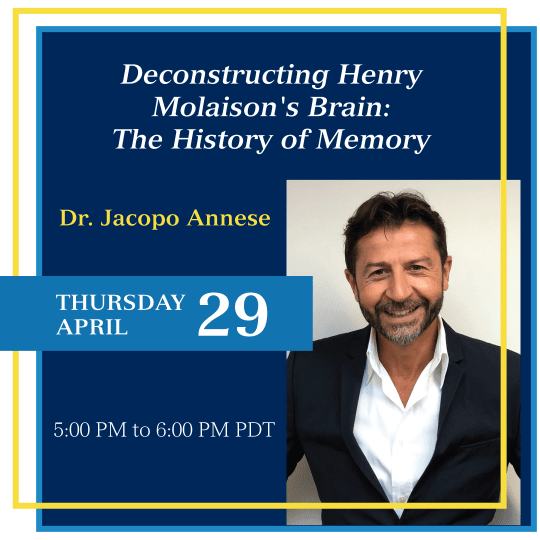 Answers to a medical and scientific mystery unfolded in Dr. Jacopo Annese’s Brain Observatory back in 2008. It was then that he dissected a very special human brain into 2,401 hair-thin tissue sections for microscopy to an audience of over 400,000 online. The brain belonged to Henry G. Molaison (a.k.a amnesic patient H.M.), the most famous case in neuroscience research. Slice by slice, 50 years of conclusions about human memory were called into question. Join us at the Westcliff Distinguished Innovator Speaker Series as Dr. Barry Sandrew interviews Dr. Annese and explores the intriguing story of H.M.’s brain and the potential ramifications of the unexpected results of Annese’s postmortem anatomical study.

Dr. Annese founded The Brain Observatory in 2005, where he set out to develop a public library of donated human brains that are processed and digitized into multiple terabytes of image data. Patient H.M.’s brain is forever preserved in the library and fully accessible to everyone for research and education. As Dr. Annese will explain, patient H.M. may still hold many secrets yet to be discovered.