Events
Home    |    Events    |    Distinguished Innovator Speaker Series: Finance and Other Career Opportunities in Hollywood: It’s Like Any Other Business

Distinguished Innovator Speaker Series: Finance and Other Career Opportunities in Hollywood: It’s Like Any Other Business 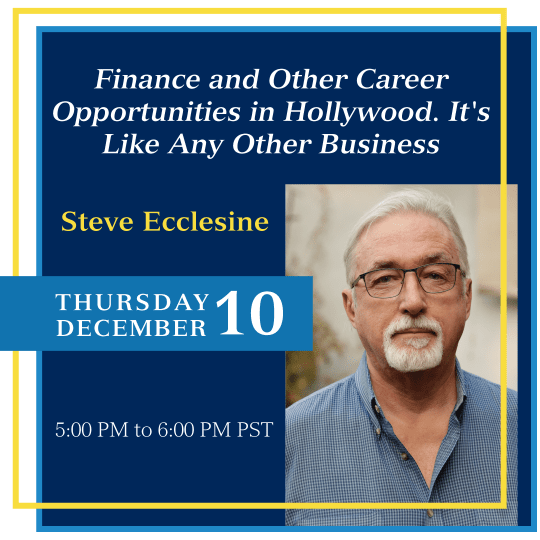 Finance and Other Career Opportunities in Hollywood: It’s Like Any Other Business

Join us on Thursday, Dec. 10th for insights on career opportunities in Hollywood:  Irvine is only a one-hour drive from Hollywood, the entertainment capital of the world. Each year there are 150,000 college graduates with some kind of degree in mass communication who are primarily interested in the ‘Show’ and pay scant attention to the ‘Business’.  Underlying all the perceived glitz and glamor of the entertainment industry, behind the cameras there is an elaborate manufacturing process producing movies, TV shows, commercials, music videos, etc.for a worldwide audience with a voracious appetite. While actors, directors, and producers get most of the attention, there is literally an army of professionals with a wide spectrum of skill sets who are essential to any successful production. Making decisions about which projects to greenlight and keeping track of the money are two essential elements that keep Hollywood clicking along. Most people running Hollywood today began on the ‘Business’ side. Steve Ecclesine has spent his career making movies, documentaries, music videos, and TV magic by managing the investor’s expectations while overseeing all sizes of budgets. If you love Show Business, if you’re great with numbers and are a good collaborator, Steve will explore a myriad of opportunities on the ‘Business’ side of the ledger and how a fresh MBA or DBA graduate can navigate a very difficult industry and build a career.

Over the past three decades, Steve Ecclesine has worked with many notable directors including Roger & Gene Corman on The Slams and Orson Welles’s on The Other Side of The Wind that premiered last year on Netflix. Other notable producer credits include Airwolf II for Universal/USA  and the Sliders TV series for FOX.

This year Steve produced fifteen Justin Bieber’s 2020 Dance Videos for YouTube that generated over 80 million views in four months. Other music-themed productions include Chasing Happiness: Jonas Brothers for Amazon Prime and Demi Lovato: My Truth, a documentary for Google/ YouTube that follows Demi through 20 concerts in 30 days.

Most recently Steve produced and directed an acclaimed Alzheimer’s documentary film, Have You Heard About Greg?, The story of Greg O’Brien, author of the best-selling book, On Pluto: Inside the Mind of Alzheimer’s.

Steve is credited with five original Creature Features movies for HBO/Screen Gems: She Creature, Day the World Ended, How to Make a Monster, Earth vs. The Spider, and Teenage Caveman, with creatures by Academy Award winner Stan Winston. He also produced a trio of films for Warner Home Video’s Raw Feed 2: Rest Stop II, Otis, and Alien Raiders.

Steve Ecclesine authored So You Wanna Be A Producer? a definitive textbook on the art and business of feature film and TV production currently being used as curriculum in film schools around the country.

Virtual Meet & Greet: College of Technology and Engineering (AM Session)