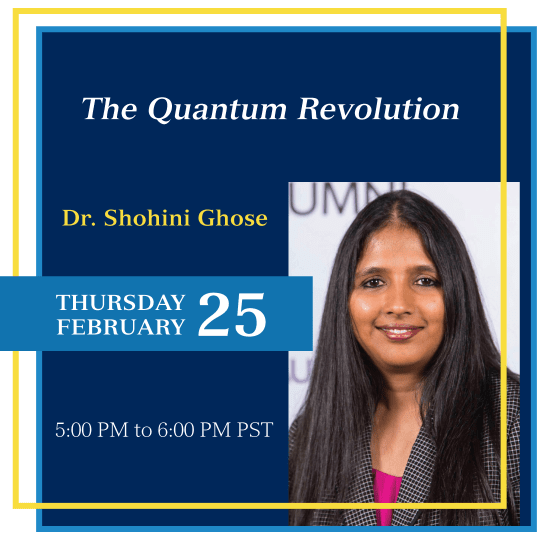 Enjoy a guided tour through the quantum wonderland. Your journey will include an introduction to the strange quantum world, an exploration of the quantum technology landscape, and a glimpse into its impact on science and society.

Shohini Ghose wanted to be an explorer like Rakesh Sharma, the first Indian to go to space. She hasn’t made it to space yet, but she did become an explorer of the quantum world as a physics professor at Wilfrid Laurier University, Canada. She examines how quantum physics can transform computing and communication. She and her colleagues first demonstrated a connection between chaos theory and quantum entanglement. Dr. Ghose is a tireless advocate for women scientists as the founding Director of the Laurier Centre for Women in Science and as the President (2019-20) of the Canadian Association of Physicists. She is the recipient of several awards including a TED Senior Fellowship in 2018.  In 2017, she was named to the Royal Society of Canada’s College of New Scholars, Artists, and Scientists, and she was among 25 women scientists from around the world featured in a 2019 UNESCO exhibit in Paris. She currently holds the NSERC Chair for Women in Science and Engineering in Ontario.