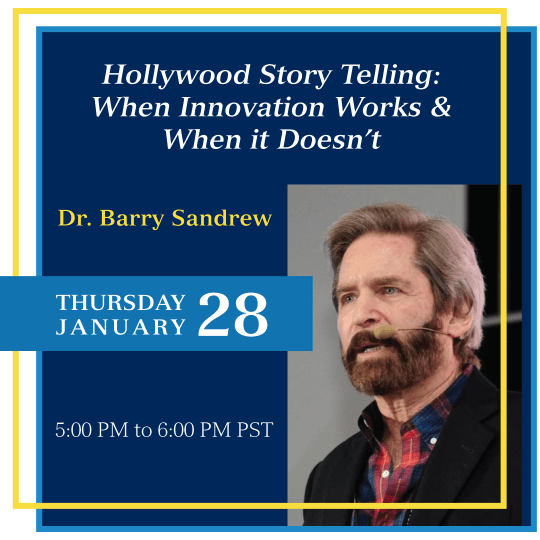 Hollywood Story Telling: When Innovation Works & When it Doesn’t

Lessons Learned from the Colorization and 3D Conversion of Feature Films Applied to Augmented and Virtual Reality: The Dynamic State of Hollywood Storytelling and Where It’s Headed

From Harvard neuroscientist to internationally recognized serial entrepreneur, Dr. Barry Sandrew is a digital imaging expert & visual effects (VFX) pioneer. He has over 34 patents in feature film production and visual effects and is the inventor of digital colorization of black & white movies! Not only that but has also invented the conversion process of 2D to 3D for feature films. He has decades of feature film & TV accomplishments including productions for all the major Hollywood studios, TV networks & several cable networks.

Against the backdrop of Woody Allen, John Huston, and Frank Capra testifying before congress that colorization was an assault on their creative rights, Dr. Barry Sandrew, a Harvard neuroscientist was enticed to come to Hollywood by Wall Street to help bring the feature film industry, kicking and screaming into the digital age via digital colorization. Over the past two decades, Sandrew has seen Digital Cinema transform every aspect of the Hollywood feature film industry. The digital revolution continues as virtual and augmented reality are challenging the very definition of storytelling and visual effects have taken on a leading role in many of the biggest blockbusters coming out of Hollywood.

Recognized as a pioneer in visual effects and digital cinema, Sandrew is the original inventor of digital colorization of black and white feature films as well as the inventor of digital paperless animation, compositing, and special effects system employed by Amblimation on Spielberg’s first all-digital animated film, We’re Back: A Dinosaur Story. Most recently, Sandrew is the inventor of a process for converting 2D movies to 3D which has been employed on over 65 of the highest performing feature films that have come out of Hollywood in the past 10 years. In Dr. Sandrew’s keynote, he’ll expound on his challenging journey from colorization to 3D conversion to immersive cinematic reality and the many lessons he’s learned along the way about the movie-going audience as well as predictable trends in the consumer adoption of new forms of entertainment.